from the Southwestern suburbs of Sydney hails Judge, with his solo debut, “The Beginning of the End“. As 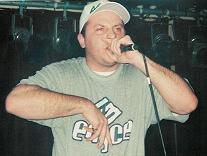 one half of The Eastern Bloc, Judge has built a reputation for hardcore Hip-Hop that takes no prisoners, and with this solo-outing he doesn’t disappoint. With top-notch production by Asip, Nayss (Cannibal Tribe), Pabz, and Nate The Great, and even a freestyle recorded on Triple J’s Hip-Hop Show, “The Beginning of The End” is now available through Hardcore Classic Distribution.

Alongside proven classics such as “X When The West Invades” laying down the law to weak Hip-Hop crews, new cuts like “X Outwest Mind Set” explore themes and subject matter never before heard on an Australian release – instead, this is music relevant to the Hip-Hop generation living suburban regions around the country. Judge knows what the Austraian experience is – and that is different if you are a young male growing up in Cabramatta and Fairfield. Unapologetically, TBOTE serves you Judge’s reality whether you like it or not. Hip-Hop music directed at the Hip-Hop audience without the gimmicks and clichés too common among Hip-Pop stars trying to crack the mainstream.

In the late 90s, Judge arrived in the scene alongside his brother Asip as The Eastern Bloc. Together they earned a reputation as formidable battle MCs, taking out numerous audio battles against Australia’s then best. Early in 2003, Asip settled into the role of producer, and the two dropped “F**k A Demo” – an anti demo of sorts. Not only did it demonstrate their skills, but also successfully silenced all naysayers and doubters of the Bloc’s potential.

TBOTE showcases Judge’s extreme brand of MCing over a host of different beats, alongside the proven Eastern Bloc sound. It’s raw, straight up Sydney Hip-Hop – it’s the Beginning of the End, out now through Hardcore Classic Distribution.